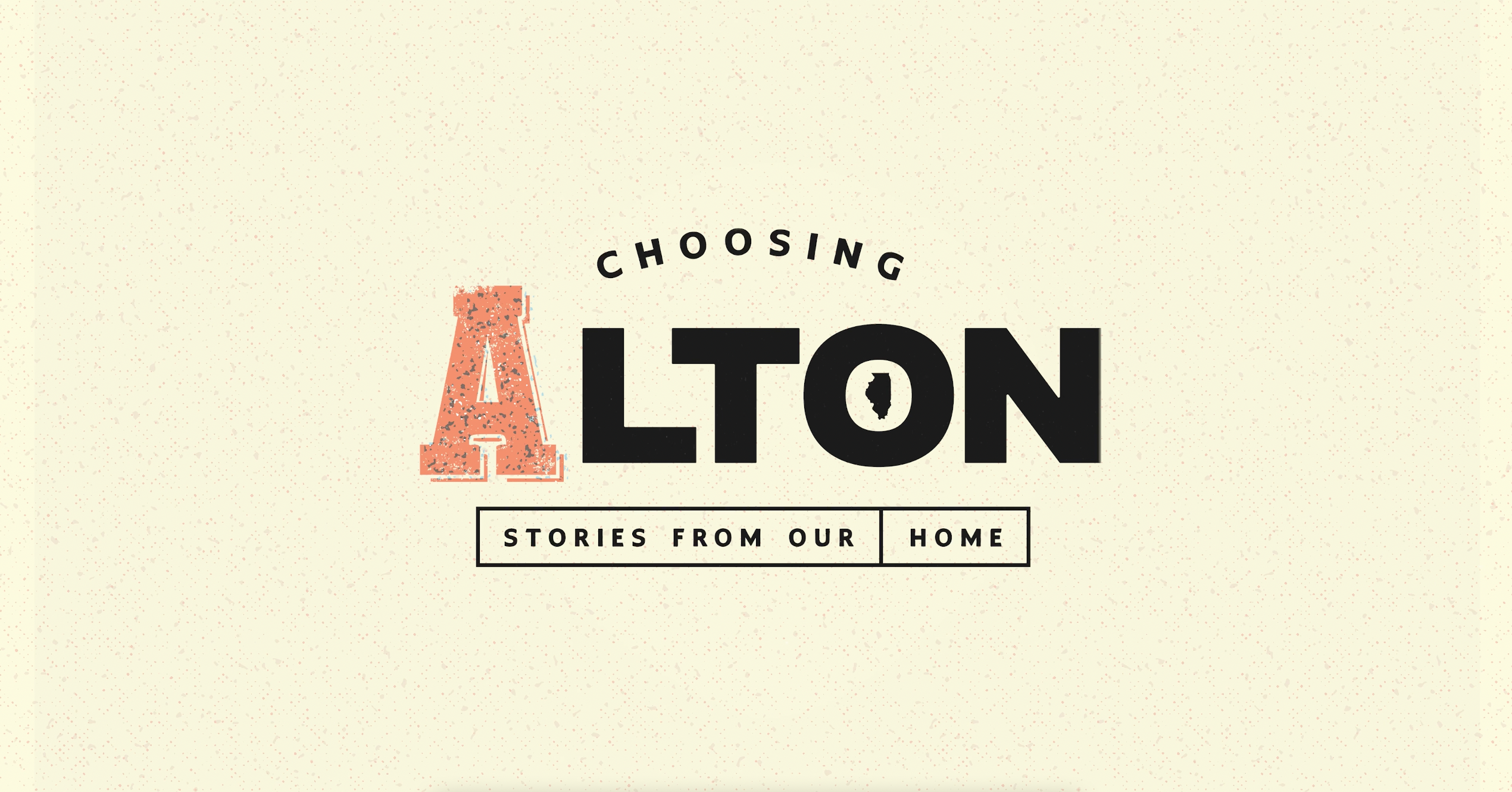 You never know who you are next to in line at the grocery store or who may be filling their gas tank on the other side of the pump. Your neighbor may have a compelling story of where they are from and how they landed next door to you, and it could be a story you never knew.

​“Choosing Alton” delves into these details in casual conversations focusing on those very stories among a diverse and interesting segment of the Alton population. Join us in learning of their life circumstances, interests and experiences which led them to “choose Alton” as a place to live, learn and enjoy.

From farming in Europe, to working in a science museum in Charlotte, to eventually opening Funky Planet Toys in Alton, Sage Macklay and David Nadolsky have spent time in many different cultures. Their experiences were ultimately building blocks that led them to their forever home. With the desire to start a family, own a house and start a business, Alton checked all of their boxes.

Penny Schmidt was born in New York, grew up in Elsah, and then returned to New York to start a gallery at the ripe age of 26. Years later while visiting her father in Alton after 9/11, Penny and her husband came to a transitional point in their lives and began to rethink their paths. With a renewed lens of the Riverbend, Penny restored an old building that is now known as residential living space, Mississippi Landing.

One is an Alton native returned, the other a Northern Virginian turned Riverbend resident. Husband and wife, Damian and Dr. Dee Dee Jones, both have one thing in common: They chose Alton. Now 22-years later, they’ve grown to love the town, and even more so — the people.

Local artist and maker, Michael Snider — commonly known for his brainchild, the Kooliverse — is a self-proclaimed Deadhead from Indiana. After years of touring with the Grateful Dead, he discovered the joy of like-mindedness that he now experiences in the Alton community. Although homelessness led him here, he’s found a home in this town for 18 years, surrounded by genuine people and an emerging art scene.

Kieran McGuane and Martha Phillips experienced vastly different environments in the early years of their lives. Kieran, born in Ireland and accustomed to frequent travel through his work in insurance, changed course and found his passion in culinary school. Martha had a career in law, and grew up in the Midwest. Their paths crossed years later and as fate would have it, they got married and chose to live in Alton. The two of them now run a successful restaurant, Epicurean Fare, in historic downtown and are among the innovators who are embracing business development and cultural diversity through food.

Alton springboarded a sense of wonder and creativity for Jenna Muscarella as a little girl. From the architecture, to the scenery, colors and flavors of the town, Jenna believes the uniqueness of Alton cultivated her own artistic eye as an adult. And while she believes Alton has experienced a renaissance in recent years, the structural integrity of the city she’s known and loved has remained the same.

Matt and Laura Windisch didn’t choose Alton, they firmly believe that Alton chose them. Their hearts and families were in Missouri before taking the plunge, but the Riverbend was calling. The two of them now run Alton’s successful food truck park, Flock, in addition to Stacked Burger Bar in St. Louis.

A national Zillow search led Leo Portal to discover Alton and the historic real estate that he was looking for. Originally from Lima, Peru, Leo’s first exposure to the U.S. was the Bay Area — but the Midwest is where he is now established. What surprised him most about Alton was the sense of interconnectedness among people with different backgrounds and sexual orientations, something that you don’t often find in small towns.

Being from Alton, Matt Anderson always knew there was a special charm to the town. But when he and his wife, Sandra, moved back in 2020 after living and teaching overseas, they quickly realized that Alton now boasts a food and drink scene that rivals those that they experienced on their travels. In settling down here, Matt’s intuition was reaffirmed that Alton did in fact hold a charm, and a thriving neighborhood to raise his family.

Alison and Shawn Neace share a deep appreciation for two things: music and the Alton School District. From the time she was a young student entering the district years back, Alton schools welcomed Alison with opportunities and resources aplenty to express herself through music. Now, years later, the Alton music community has done the same for her own children.

The diversity and missional call are core reasons Hugh & Cheryl Halter feel such affection for the town of Alton. Portland natives and long-time Colorado residents, this family chose Alton, having a sense it was “something they were supposed to do.” They now incubate businesses through their nonprofit coffee shop, brunch kitchen and event space called Post Commons.

David Zielinski and Kim Haegele Labidi are among those who grew up in Alton, left to get a taste of life in other cities, and then returned to Alton to settle. They believe that individuals who experience the world outside of Alton then come back bring a new flavor to our town — making this a place that has the ability to change and evolve through its people.

The Alton Main Street program makes a big impact on our quality of life, from numerous fun events to making the front door of our community more inviting.

When you give to AMS, you are supporting:

All things that give Alton its charm and distinct personality

Our historic downtown district is experiencing an influx of exciting developments; please add your support to this momentum and help us create a district that’s flourishing with positive activity!